There is absolutely nothing fun about being bed-ridden with a bad case of influenza. This also just so happens to be the heart of flu season. So, how do you defend yourself against catching the flu this year? Well, avoiding contact with people who currently have the virus is always a good idea, as is quickly disinfecting areas and materials that have come into contact with an infected person. Carrying around a portable bottle of hand sanitizer, is also a very good idea. And of course, trying to avoid contact with objects which are known to be covered in germs, ie., subway poles and stairwell banisters. But what about those lesser known, somewhat hidden areas where flu germs may lurk? Luckily, Market Watch, has a list of 7 unexpected places flu germs may be hiding.

Don’t touch anything this holiday season

This flu season is expected to be a particularly nasty one due to the strain of virus that’s being reported, and as careful as we try to be, there are germs lurking in some surprising places.

Although reports of influenza are low compared with previous years, Americans should brace for a particularly bad strain, according to an official health advisory released this month by the Centers for Disease Control and Prevention. “This season, influenza A (H3N2) viruses have been reported most frequently and have been detected in almost all states,” the advisory said. H3N2 is associated with higher hospitalization rates and more mortality has been observed, especially among older people, very young children, and persons with certain chronic medical conditions, the CDC reported.

If that wasn’t bad enough, microbes that cause norovirus — which in turn leads to vomiting and diarrhea — as well as other infections lurk right under most people’s noses.

Here are 7 odd places to watch out for hidden germs:

The bad news for planes with quick turnarounds: nasty bugs can last for days. The sinister sounding Methicillin-resistant Staphylococcus aureus (more commonly known as MRSA) lasted longest (168 hours) on material from a seat-back pocket while the bacteria Escherichia coli O157:H7 (also known as E.coli, which can cause kidney problems) survived longest (96 hours) on the material from the armrest of planes, according to research presented to the American Society for Microbiology earlier this year. Restrooms in planes where space is cramped is also another hotspot for germs.

Most people (at least during flu season) are careful about touching stainless steel poles on subways and buses, but don’t often think about subway turnstiles and bus ticket machines that are arguably touched by even more people, says Charles Gerba, a microbiologist at the University of Arizona. “They don’t routinely disinfect these machines,” he says. Commuters are 6 times more likely to develop an acute respiratory infection if they traveled recently by bus or tram, according to a 2011 study by the University of Nottingham in the U.K. and published in “BMC Journal of Infectious Diseases.”

Smart people keep their distance from sick colleagues, but then use the same coffee machine or water cooler. Germs like hard surfaces and can find their way to 40% to 60% of common surfaces in offices, hotels and health care facilities in just 2 to 4 hours, says Gerba, who recently conducted a study on how viruses spread in the workplace. He presented its results earlier this year at the 54th Interscience Conference on Antimicrobial Agents and Chemotherapy in Washington, D.C., an infectious disease meeting of the American Society for Microbiology. Obviously, avoid doorknobs and other people’s keyboards.

While it’s a good idea to open the door of a washroom with your sleeve, there’s one other piece of equipment that should be avoided like the plague: Soap dispensers. Liquid soap itself can become contaminated with bacteria and 1-in-4 dispenser machines in public restrooms are contaminated with bacteria, including fecal matter, according to a 2011 study published in the journal Applied and Environmental Microbiology. “Washing with soap from dispensers with sealed refills significantly reduced bacteria on hands,” the study found. Failing that, bring your own.

When traveling by bus, train or plane this holiday season — or even when visiting a theater — think twice before choosing aisle seats. These are the seats that will be touched most often by other people as they’re trying to find their own, Gerba says. In 2008, members of a tour group experienced diarrhea and vomiting in an airplane flight from Boston to Los Angeles. Other passengers who suffered secondary infections were either sitting next to those infected — or unsuspecting passengers seated in aisle seats, according to a study published in the journal Clinical Infectious Diseases.

There’s often no point in washing your hands before a meal (thereby avoiding doorknobs and soap dispensers), and picking up clean cutlery — and then using condiment holders that have often not been washed. A 2008 study by researchers at the University of Virginia examined 30 people who were showing symptoms of the common cold and were asked to identify 10 surfaces they’d touched in their home over the previous 18 hours: more than 40% of the surfaces tested positive for rhinovirus, the most common virus to cause the common cold: All salt and pepper shakers cited by participants tested positive.

Exercise equipment at the gym

Bacteria loves moisture, especially sweat, but one study found that rhinoviruses still cling to exercise equipment — even after cleaning. A final thought for germ-phobic people who are afraid to travel this holiday season: Many colds and flu are spread around the home, says Elizabeth Scott, associated professor at the Department of Biology at Simmons College in Boston. But it’s always good to leave the house prepared. “When I am traveling, I always carry a small bottle of hand sanitizer and use it many times,” she adds.

Are you one of the many people who ask family and guests to remove their shoes before walking through your home? If so, you may have the right idea. In this article from The Wall Street Journal, doctors explain the science of footwear germ transmission.

Is It Worth Enforcing a Shoe-Free Home?

In cities and suburbs alike, more people are adopting a no-shoes-at-home policy. It is more hygienic, practitioners say, and keeps out outdoor germs. Is a shoe-free policy really better for our health? Heidi Mitchell reports. Photo: Getty.

In cities and suburbs alike, more people are adopting a no-shoes-at-home policy. It is more hygienic, practitioners say, and keeps out outdoor germs. Is the argument grounded in science? One expert, Stephen S. Morse, professor of epidemiology at the Mailman School of Public Health at Columbia University, explains what lies deep in the sole, and when not to ask guests to go barefoot. 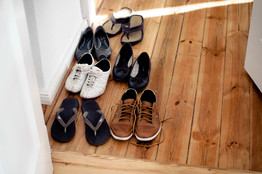 Mud and dirt collect in the grooves of shoe soles, especially after rain or snow. Even if a person is walking through seemingly clean office buildings, shoes pick up lots of unexpected grime. Bacteria and viruses such as E. coli and those that cause influenza may also attach themselves to shoes. Near farmland or any exposed soil, more harmful pathogens may lurk. That said, “they’d have to make their way into a human through a lesion on the skin, and that’s a pretty far-fetched scenario,” Dr. Morse says.

Carpets and wet surfaces might harbor fungi such as those that cause athlete’s foot and the virus that leads to Plantar warts. The risk of catching anything more severe is low, however, whether a no-shoe policy is strictly enforced or sometimes lax.

Who Should Consider It

Homes with crawling babies might benefit from being shoe free because little ones are more likely to put items found on the ground into their mouths or leave unpleasant things behind for adults to step on. Dr. Morse also offers a practical reason: Wood floors and other surfaces can look cleaner without shoe traffic. In his home, Dr. Morse tends to remove his shoes at the door “for the sake of keeping my marriage intact,” he says.

The Case for Slippers

Dr. Morse points out more immediate problems with going shoeless: injuries that might occur while walking around in bare or stocking feet. “You could step on a nail,”he says. “But mostly, the concerns are aesthetic.”

Since he isn’t comfortable going public with bare feet, he’ll wear socks or slippers. “A thoughtful host might provide disposable slippers like the ones they give away in business and first class on airlines,” he says, though he’s never actually experienced this form of hospitality.

Because forcing repairmen or dinner guests to remove their boots or shoes each time they enter the home is a hassle, Dr. Morse believes that insisting on a shoe-free policy isn’t worth it. Besides, he says, a little dirt can be a good thing: “The Hygiene Hypothesis says that one of the reasons why we see asthma and allergies is because the immune system isn’t being kept busy with fighting off the bad guys,” he says. “There is evidence for both sides, and we epidemiologists debate this every week.” As long as guests wipe their feet on the doormat, shoes are fine, he says. “It might save your floors a lot of cleaning, but other than that, we have no reason to believe that shoes in the home are a real hazard.”