With the recent Ebola virus crisis, concerns about health and safety on commercial flights have increased. Let’s face it, when you’re 30,000 feet in the air, and major cities appear as random clusters of light; the cleanliness of your plane is the last thing you want to worry about. Unfortunately, many of these worries may be warranted. This article from The Wall Street Journal, discusses the cleaning regulations (or lack thereof) of many commercial airlines. My advice, load up on Vitamin C and hand sanitizer before your next flight!

With the Ebola Crisis in the Background, Standards for Disinfecting Planes Vary Based on Time, Class

The Ebola crisis and heightened concerns about the risk of spreading disease during air travel have focused concern on what airlines do to keep planes clean.

It’s a murky area without clear regulatory standards. The Federal Aviation Administration says it doesn’t regulate or inspect cleaning and referred a reporter to the Occupational Safety and Health Administration, which says it has nothing to do with aircraft cleanliness. OSHA suggested contacting the FAA. The FAA then suggested the Food and Drug Administration. The FDA says it inspects food and water safety on commercial aircraft only.

Airlines say they set their own standards without regulators and give voluminous instructions to contractors. They use chemicals approved by aircraft manufacturers and conduct their own quality-control inspections. 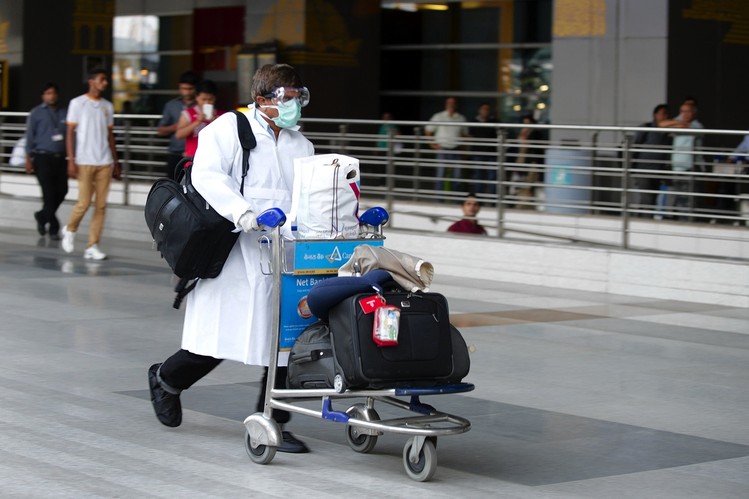 With more than two billion people flying every year, “commercial air transport is potentially an efficient means for spreading communicable disease widely by surface contact and proximity to infected people,” the World Health Organization cautions in itsGuide to Hygiene and Sanitation in Aviation. Much of the risk comes from being in close contact with an infected person. But contaminated surfaces on airplanes also can spread disease.

Some airlines are reluctant to discuss how much cleansing airliners get. Typically, planes get a once-over straightening-up between flights and usually a more thorough cleaning overnight or between long international flights. Periodically planes get scrubbed from nose to tail when they undergo major maintenance work. 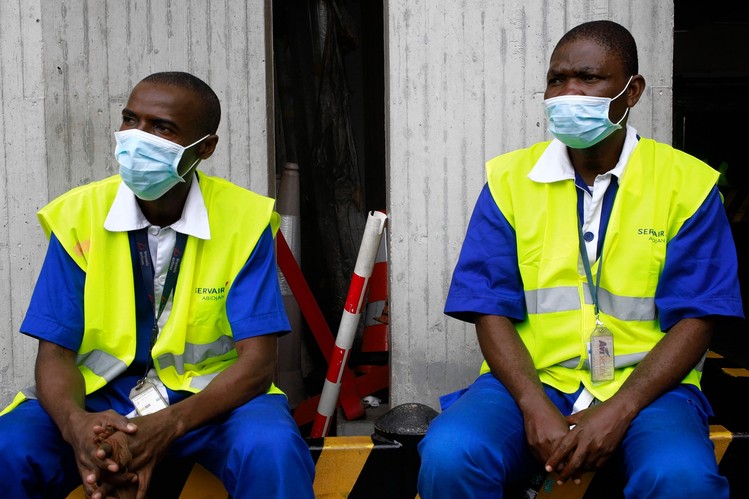 Delta Air Lines and United Airlines say their aircraft that fly into and out of hot spot zones such as western Africa, where several countries are under the threat of the Ebola virus, get a thorough cleaning with disinfecting solution per guidelines issued by the WHO. Because of the Ebola threat, United increased its cleaning regimen on aircraft flying between Houston and Lagos, Nigeria, on the WHO’s recommendation. The Centers for Disease Control and Prevention also issued guidelines for protecting crew members and reporting ill passengers. Airlines say they are complying.

Medical studies have shown that air travelers face higher rates of infection: One study pegged the increased risk of catching a cold at 20%. Much of the danger comes from the people within two rows around you. 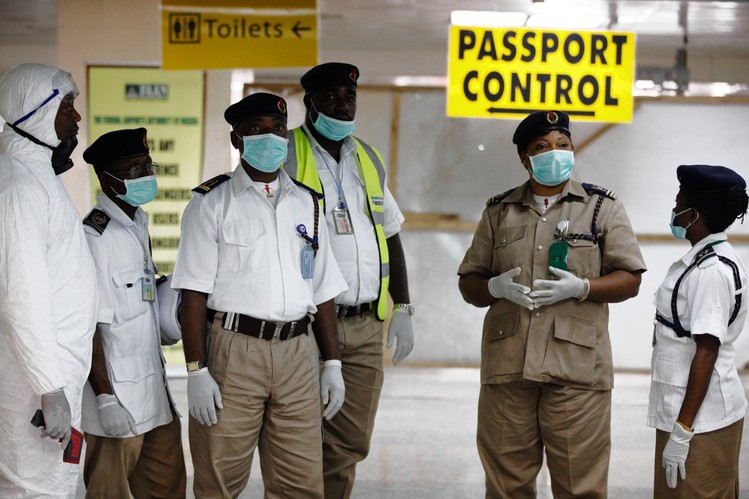 But viruses and bacteria can live for hours on some surfaces. Some viral particles have been found to be active up to a day in certain places. Tray tables can be contaminated. Seat-back pockets, which get stuffed with used tissues, soiled napkins, dirty diapers and trash, can be particularly scuzzy. It’s also difficult to know which germs are lurking in an airline’s pillows and blankets, which sometimes don’t get sent to the laundry until the end of a day’s flights.

How clean the airplane appears can go a long way toward making fliers happy. “We see in data that customers enjoy a flight more when the airplane is clean,” Delta spokesman Morgan Durrant says. “And we certainly hear it when it’s not so tidy.”

Carriers don’t report what they spend for cleaning, but some have said they reduced costs in that area when pinched economically. They have also mentioned boosting spending on cleaning during economic recovery after customer complaints about dirty airplanes. Two years after emerging from bankruptcy reorganization, United said it would do “deep cleanings” on planes several times a year, instead of once every 18 months, after increased customer cleanliness complaints.

Singapore Airlines spokesman James Bradbury-Boyd says a crew of up to 12 contract workers spends about 40 minutes cleaning a Boeing 777-300 during a typical stopover in Houston. Floors get vacuumed, sheets are changed in crew rest areas, and toilets, waste bins, galley floors and wine chillers are washed. Pillows, headrest covers and blankets get changed out.

But while airlines know a visible mess alienates passengers, the more serious cleaning is the cleaning you can’t see. Most airlines say there’s not enough time between domestic flights to clean out seat-back pockets or wipe down tray tables—that happens in overnight cleanings. 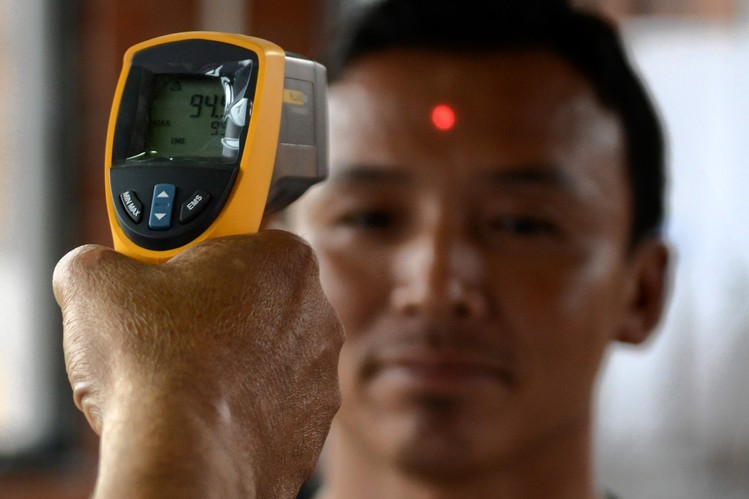 ENLARGE
A Nepalese health worker inspected an arriving passenger with an infrared thermometer for signs of fever, one of the symptoms of Ebola, at a health desk at the international airport in Katmandu, Nepal on Aug. 20. GETTY IMAGES

And there are small variations in how airlines clean. United, Delta and American Airlines say bathrooms and galleys get cleaned with disinfectant during overnight cleanings and after long international flights. But that’s not always the case for passenger tray tables. United uses general-purpose cleaners on them; Delta uses disinfectant. American says its normal procedure is to clean, then disinfect, but that may soon change.

In 2010, Delta spent a year testing disinfectant products for cleaning and for availability world-wide before settling on one standard following its merger with Northwest Airlines. (A Delta spokesman wouldn’t reveal which product it uses.) Use of disinfectants can be tricky, since some can corrode metals and cause damage to materials in aircraft interiors.

For domestic flights, the “turn time” between flights often dictates what kind of cleaning the airplane gets, Mr. Mayer says. On quick turns, workers remove visible trash from seat-back pockets. On standard turns, cleaning crews actually go through and clean the seat-back pockets out. And if there are bigger problems, flights will get delayed. “If someone vomited on a seat, we are going to take the delay and clean it up,” Mr. Mayer says.

With all flights, the bathrooms and galleys get cleaned and supplies get restocked. Workers are asked to remove trash, wipe crumbs off seats, put all armrests down and clean up large spills. Airplanes aren’t vacuumed until overnight cleaning.

Most customer feedback on long-haul flights involves messy lavatories, Mr. Mayer said. On domestic trips, seat-back pocket trash is “probably one of the top pet peeves,” he said. On a tight turn, cleaners just don’t have time to clean it all out.

Every 35 to 55 days, depending on the aircraft type, United planes get a “deep cleaning” that includes washing the ceilings and sidewalls and the seat-bottom cushions. American says it does its version of deep cleaning—washing seat cushions and cleaning carpets and floors, lavatories, bins, tray tables—every 30 days. Delta said its planes get a deep cleaning every 90 to 100 days when jets get regular maintenance work.