Clean Conscience has a few Nepalese women that work for our organization and upon hearing of the devastating earthquake that impacted Nepal we immediately felt the need to contribute. We are strongly encouraging those with the ability to help to also make a contribution to an organization that is helping those impacted by this devastation. The organization that Clean Conscience chose to make a charitable contribution to is the International Medical Corps. You can follow their link here https://internationalmedicalcorps.org/. 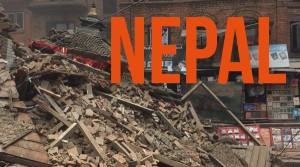 Our friends at Ocean First Divers in Boulder, Colorado are hosting an event this evening, April 23rd starting at 6:30p.m. This is an informative recycling event and provides helpful information for those people in our community that would like to learn more about recycling, what is recycable, and how the process works. Light refreshments will be provided for this FREE event at Ocean First Divers located at 3015 Bluff Street, Boulder, Colorado 80301. Whether you are a beginner and interested in learning more about the recycling process and how it helps, or you have been recycling for years, the Eco-Cycle event will be surprisingly informative. Stop in tonight at Ocean First Divers at 6:30 p.m., and grab a refreshment, have a nice chat and meet others in the community who are interested in recycling. 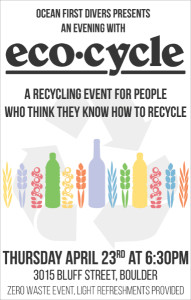 Today is April 22nd, also known as Earth Day. Today is a day that everyone is supposed to go the extra mile to do something positive for the environment. All across the country, many major cities have several Earth Day events which the public can attend. Denver, happens to be one of those cities. In fact, this article from FOX31 Denver, lists several of the events being held in and around the city.

DENVER — Wednesday is Earth Day and there will be events throughout the metro area.

More than 50 sustainable businesses, organizations and city agencies will be at the annual Earth Day Fair at Civic Center Park. The event runs from 10 a.m. to 2 p.m. with Mayor Michael Hancock touring the event from 11:45 a.m .to 12:45 p.m.

The Downtown Aquarium (700 Water St.) will have a Party for the Planet from 10 a.m. to 3 p.m. There will be a nature-themed scavenger hunt, conservation crafts and activities, animal feedings and an interactive dive show.

The Alliance for Sustainable Colorado will host a recycle and reuse drive at The Alliance Center. The public can bring items to be recycled or reused from noon to 7 p.m. at the center’s parking lot (1536 Wynkoop St.)..

Students from Foundations Academy in Brighton will plant flowers outside the school from 10:45 a.m. to 12:30 p.m. Students will also hang signs around the school about recycling and help students learn more about how to help Earth.

Preschoolers at Merryhill Preschool in Highlands Ranch (9345 S. Colorado Blvd.) will release thousands of ladybugs back into the environment from 3 p.m. to 3:30 p.m.

Colorado State will host a volunteer tree planting as part of its designation as a Tree Campus USA. The trees will be planted at 2 p.m. near Danforth Chapel.

Puttin’ On The Leash 2015: Whole Lot of Shakin’ Going On, an event held by the Humane Society of the Boulder Valley. This Saturday, April 25th is their big event at the Coors Event Center starting at 6:00p.m. Come out if you are interested in learning how you can contribute to saving the lives of many animals, but also just to have a Shakin’ good time!

Click here to get your tickets today! Clean Conscience is a proud contributor to the Silent Auction of this event! Be sure to bid to win a free home cleaning from Clean Conscience! You may just be the lucky winner!

This Saturday, April 18th 2015 from 11:00-4:00 p.m. is a FREE Earth Day event at the Wild Bear Mountain Ecology Center located just outside of Boulder in Nederland, Colorado. This is the largest Earth Day event and has been running strong for the past 15 years. It is a fun-filled day of free, action-packed entertainment and education about this magnificent planet earth. There is going to be many performances and live birds of prey, live reptiles, climate presentations and other educational opportunities for the whole family! Be sure to check out the many events happening this Saturday, April 18th 2015 at the Wild Bear Mountain Ecology Center.

Bleach, a very common cleaning supply and one that can almost surely be found in most homes in the U.S., may be extremely harmful to your children. While most people are well aware of the dangers of ingesting bleach, or allowing it to come in contact with the eyes or skin; not everyone is aware of the potential dangers “passive exposure” to bleach may have on their children. In this article from Medical Daily, these potential dangers are discussed.

Yes, bleach can be quite dangerous if ingested by a child — but a new study published in Occupational & Environmental Medicine suggests that even just “passive exposure” to the chemical in the home is associated with a higher chance of childhood respiratory illness and other infections.

The researchers examined over 9,000 children between the ages of 6 and 12 throughout 19 schools in the Netherlands, 17 schools in Finland, and 18 schools in Barcelona, Spain. They measured their levels of exposure to bleach, then attempted to test the negative impact it had on their health. Parents were asked to complete questions about the frequency of their children’s flu, tonsilitis, sinusitis, bronchitis, otitis, and pneumonia during the past 12 months. They were also asked whether they had used bleach in some way to clean their homes once a week.

Interestingly, the authors found that nearly 72 percent of respondents from Spain used bleach frequently in their homes, while only 7 percent of Finnish households did. Spanish schools, meanwhile, were cleaned with bleach regularly while Finnish schools were not. Researchers found that the frequency of infections among children was linked to higher amounts of bleach use by parents at home — and the differences were quite evident when it came to the flu, tonsilitis, and other infections (the risk of flu was 20 percent higher in bleach households, and the risk of recurrent tonsillitis 35 percent higher in bleach households). The risk of any other infection happening again was 18 percent higher among the children exposed to bleach.

Bleach and other cleaning products might damage the lining of lung cells, causing inflammation and making it easier for infections to occur, the authors argue. Of course, it’s been known for some time that common household cleaning products aren’t meant to be inhaled or ingested; just breathing in your typical Lysol spray can make you feel dizzy or nauseous. But the study reinforces the importance of being aware of the adverse side effects of bleach and other household items.

The American Lung Association suggests sticking to soap and warm water as opposed to bleach or ammonia, as it may often do the trick just as well. For scrubbing floors or sinks, use baking soda to really get the gritty dirt out of the cracks. And vinegar mixed with water is a good glass cleaner.

“The high frequency of use of disinfecting cleaning products may be of public health concern, also when exposure occurs during childhood,” the authors write in their conclusion. They also noted that the frequent use of these products was often “caused by the erroneous belief, reinforced by advertising, that our homes should be free of microbes.”

It is hard to believe it is already the first of April. That means it has been over a week since the official start of Spring, it also means it is probably time to start the dreaded spring cleaning.

After a long Colorado winter, a thorough spring cleaning is most likely in order. Unfortunately, many people may not have the time or energy to accomplish this, sometimes formidable, task. Many times, you may not even know where to begin. Well, here are a few tips to help you get your home “spring-clean”.

“Welcome Mats”- A good step to keeping your home clean is to keep the dirt outside. Unfortunately, even the mats used to wipe the dirt off your feet need to be cleaned after a long winter. So, shake them out, hit them with a broom, or wash them. They’re the first line of dirt-defense.

“Vacuum/ Shampoo Carpets”- Even though everyone may have wiped their feet thoroughly on those welcome mats, there is still a good chance any carpets in the home may have taken a hit this winter. Vacuuming and/or shampooing your carpets will help get out any winter dirt or germs that may have traveled in on someones boots.

“Dust, dust, dust…”- After a long winter of having all of the windows and doors closed, there is going to be a decent amount of dust somewhere in your home. Even if you dust fairly regularly, the tops of cabinets, fans, and baseboards; may still have collected a shocking amount of dust.

“Light Fixtures”- An often overlooked spring cleaning task, is cleaning light fixtures. Luckily, a step-ladder, a rag, all-purpose cleaner, and a few minutes is all you really need for a light fixture to go from grimy to shiny.

“Wash the Walls”- Even though most dust and soot eventually falls and settles somewhere, there may still be some on your walls. Sponge wash them and dry with a cloth, and you may be surprised just how dirty they got over the winter months.

“Bring in the Pros”- Of course, you could always save yourself the trouble of having to clean yourself, by calling the professionals at Clean Conscience. If you happen to live in the Boulder or Denver areas, you can set up an appointment and have Clean Conscience do your spring cleaning for you!!