Nothing brings elegance and class to a room quite like a beautiful, sparkling chandelier. Unfortunately, even the most beautiful and expensive chandeliers lose their luster when they haven’t been properly cleaned and become covered in dust. So, how do you keep them clean? In this article from The Wall Street Journal, you get a look at a few ways some professionals clean and maintain these elegant light fixtures.

Chandeliers bring elegance and shine to any room—until they’re due for a cleaning. How professionals maintain the notoriously hard-to-reach lighting fixtures. 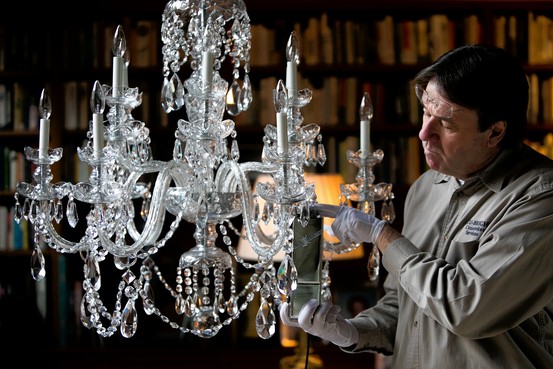 When the antique crystal looks a little too antique, when the romantic lighting goes from dim to dark, when each drop begs for a rub—it might be time to clean the chandelier.

It’s easy to forget about them. Chandeliers are usually out of reach and they’re not always in the direct line of sight. That is, until cobwebs are the center of attention at a get-together.

“You’re standing here because I had a dinner party and someone remarked at how dirty [the chandelier] was,” Brian Greene of Sparkle Chandelier Corp., based in Mount Kisco, N.Y., said one of his clients told him.

These spectacularly hard-to-reach dust-collectors are often placed in the hands of professionals when it comes time to polish them, but even the experts don’t all use the same methods. 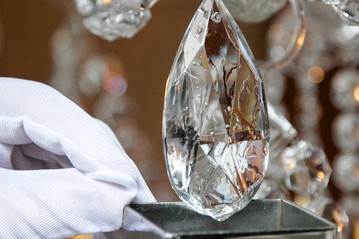 The best way to clean these beautifully pesky items? It depends on whom you ask.

This question started turning in the mind of professional cleaner Keith Campbell during a wedding he attended, when he noticed how ornate—and how dirty—the chandeliers in the hotel were.

Mr. Campbell had been studying ultrasound at the library and remembered learning about an attempt in Japan to clean clothes using sound waves. “One day it just came to me, about how to apply it to the chandeliers,” he said.

He developed a machine—a box with an open top that beamed ultrasound waves—that cleaned individual crystals when the machine was raised to surround each drop.

Mr. Campbell brought his prototype to a Marriott hotel in Boston and offered to clean a chandelier. After seeing how well it worked, the general manager then gave him the whole hotel to clean—and a great recommendation, he said.

“The rest is history,” said Mr. Campbell, the owner of Acu-Bright Inc. in Exeter, N.H.

This system takes about 80% less time than other methods, he says, and the average home chandelier costs between $300 and $700 to clean. He has used the method on chandeliers worth millions of dollars, he said.

But not everyone thinks new invention is necessary to clean a chandelier well. Sometimes it is simply a matter of repurposing a product that is already on the market.

Rinsing the cloth in a bucket filled with plain water between every rub is also important, he says, to keep the dirt from being reapplied.

“You don’t want to use anything that’s corrosive,” he said. Cleaning of an average chandelier runs about $350, he said.

Mr. Smith also notes that metal hooks holding the crystal drops are usually gold- or silver-plated brass, and ammonia can take the finish right off.

In general, chemicals can be harmful to chandeliers, stripping lacquers and metallic coatings.

Mr. Smith does full restorations in his shop on chandeliers that require more attention than he can give from the top of a ladder.

The chandeliers he sees in the store have often fallen into severe disrepair after years in storage. Others come to him after being purchased at an auction in poor condition.

Sometimes the condition of the chandelier is the result of a leak or a fire where hoses were used. Water will leak down through the electric outlet and fill up the arms of the chandelier, he said.

Good chandeliers are supposed to be airtight on the inside, he said. But in these more-extreme cases, Mr. Smith said he takes the chandelier apart, rewires it and re-pins the drops.

These types of restorations can run in the range of $700 for a standard dining-room chandelier to $1,500 for a more elaborate, or more damaged, piece.

“We hand-polish ever single centimeter of the chandelier,” he said. “It can take hours.” His jobs run between a few hundred dollars and upward of $1,000, he said.

Mr. Greene said he was brought in to clean a chandelier on the Upper East Side in New York City. It had hung in the apartment for 35 years without a cleaning.

“It looked like a milkshake,” Mr. Greene said of the layers of dust giving the piece a frosted appearance. He polished it until it sparkled like new. It took nearly four hours.

“There’s a lot of detail to it,” Mr. Greene said. “It takes patience.”