At Clean Conscience, we use cleaning products and practices that are safer for people, pets, and the planet. Check out this innovative technology that makes the planet better by using less energy to heat and cool your home.

Last month GE announced the winners of their 2011 Ecomagination Challenge (see video 4/16). One of the winners is a company called Suntulit, which means balance in Sanskrit.

Their three part system is comprised of advanced sensors, smart software, and wireless battery-operated air vents. Combined, these allow the system to learn the living patterns of people in your house and make changes to temperature based on that information. Suntulit calls this technology “Ambient Intelligence”. The system only heats or cools rooms that are occupied, or likely to be occupied, and does not waste energy on rooms that are not. For example, over time the system knows that you come into the kitchen at 7AM to make coffee. It automatically starts to condition the room 30 minutes before you get there for optimum comfort.  Here is an overview of the Suntulit system:

The system saves 30% of energy use without sacrificing comfort. Their first product is called Smart HVAC and is aimed at the residential market. Smart HVAC is in beta trials now. We hope it gets to market soon so our conscience can stay clean AND optimally cooled!

Click here to watch Suntulit Co-Founder Suminderpal Singh Bedi speak about the system on CNN at 2:10 into the video.

Imagine your name is Fido. You have four legs, a tail, are covered with fur, and the only things that matter in life are eating your delicious dog food, playing with your ball, chewing your bone, and receiving love and attention from your owners. You enjoy the simple life – running outside, lying in the sun and sometimes you get to go swimming. You get more than 16 hours of sleep a day and couldn’t be more relaxed. What could be better?

Life as a dog, or any house pet for that matter, most definitely has its perks. Heck, on some days, we would like to trade them places! However, no matter how glorious their lives must seem, the fact of the matter is, by living inside of the house most the time, animals are extremely susceptible to household toxins and cleaning chemicals (sometimes more so than humans, as they spend many more hours inside the home than we do).

Because dogs and cats spend the majority of their time lying on surfaces such as carpeting, wood flooring, any chemicals that are used to keep the carpet stain-free and the wood floor shining are inhaled by animals, and absorbed into their skin. Is there a spill on the counter? If a dog licks it up, they also ingest the counter cleaner you used 30 minutes ago. When they’re thirsty, they may venture to the toilet, sink or shower that may have been cleaned with harsh, toxic cleaners and abrasives, which then make their way into the animal’s organs, accumulating and many times causing illness and cancers.

It’s easy to overlook the impact of chemical cleaners on animals, as residue left on surfaces or in carpeting is most of the time invisible to the human eye. If it looks clean and smells clean, we don’t really think about fumes that may be circulating through the air, or the negative effect of the chemicals residing on the surfaces of our homes. That’s where we come in – it is our mission to prove that “clean” doesn’t have a smell, shouldn’t leave chemicals on your surfaces, and doesn’t compromise your health, or the health of your pets.

When it comes time to clean your home, choose safe, chemical-free cleaners. Or, give us a call to do the job for you! Fido will thank you. Woof!
Safety Note: If you think your pet may have ingested a potentially poisonous substance, it’s a good idea to contact your local veterinarian or the ASPCA Animal Poison Control Center at (888) 426-4435 for help.

Interesting article in last week’s Wall Street Journal. I’m hopeful that manufactures will continue to improve packaging which will help change consumer behavior. Portion Pac has a great packaging / dispensing solution that we use every day.

A bottle of Windex is mostly water. So it would seem only logical that the maker of the cleaning fluid plans to sell pouches of refill concentrate. The consumer would save a buck or two simply adding the water at home.

Think of the winners: the company, the consumer, the environment.

In reality, though, S.C Johnson & Son Inc., the maker of Windex, hasn’t set its hopes too high.

“The past is littered with failures” when it comes to the idea of refills, says S.C. Johnson Chief Executive Fisk Johnson. When it launches the product Friday, the closely held consumer-products company plans to offer the refills only through its website while it tries to build an audience.

The company acknowledges that the home chemistry project of pouring cleaners like Windex into narrow spray bottles and then adding water can be taxing.

“Behavior changes are the most difficult thing to do,” Mr. Johnson said. “That’s the nut we want to crack here.”

Other companies also hope to convince American consumers that the inconvenience and potential mess of pouring cleaners from a refill bag into the original bottle is worth it. Method Products Inc. launched refill pouches for its laundry detergent and dish soap in March and has plans to roll out refills for additional cleaners next year.

Manufacturers have lots of reasons to like refills. The containers lack the sophisticated trigger sprayers, pumps or caps of the original bottles, making them cheaper and faster to produce, fill and ship—important savings as they watch commodities and fuel costs soar. Refills also give consumers an incentive to stick with a brand.

Costs per unit can be 20% to 30% lower with refills, boosting profit margins by 15% to 20%, says Burt Flickinger III, managing director of consumer-products consultancy Strategic Resource Group.

Refills are in wide use in Europe, where landfills and expansive pantries aren’t as plentiful. American consumers, in theory, also should like them for the potential savings and the eco-friendliness from the smaller containers. Containers and packaging generated about 72 million tons of trash in 2009, nearly one third of that year’s total municipal solid waste, according to estimates by the U.S. Environmental Protection Agency.

They just haven’t caught on. “Refills have had mostly five decades of failure,” says Mr. Flickinger, the consultant.

Winning shelf space in stores is difficult, though, because retailers must continue to stock the original bottles as well as their subsequent refills. Manufacturers also acknowledge that refill pouches, which typically resemble flexible plastic bags, often droop on shelves, making the aisle appear untidy.

Earlier this year, German consumer-product maker Henkel AG replaced the refills for its Purex 3-in-1 Laundry Sheets with new boxed packaging, blaming a lack of space and the propensity of the refill packages to fall over on store shelves.

To give its pouches better in-store posture, Method developed a weighted handle and sturdy base for the new refills. The design also aims to persuade consumers that the pouch is durable and easy to use.

Eric Ryan, Method’s co-founder, says sales of its refill products are on the rise and are so far exceeding company expectations. “The initial perception is that it could be messy and fragile,” Mr. Ryan says. “But once you get consumers to try them, they realize how easy it is.”

For the consumer, the savings mirror what might be available with a coupon. Windex’s pouches, which are sold in packs of three for $7.50, plus shipping, handling and sales tax fees, refill 26-ounce bottles that typically sell for $2.90 to $3.50. Unlike the brand’s large refill plastic jugs, which are sold in stores, the new pouches are small and require users to add water to the concentrated solution.

S.C. Johnson says that it is considering pouches of concentrated solution for additional cleaning products, including its Fantastik, Scrubbing Bubbles, Pledge and Shout brands.

To be sure, some refill products have succeeded over the years. Hand-pumped soaps are one example. Henkel expanded refills for its Dial soap this year and has seen sales of refills for the soap category as a whole grow faster than the original packaging. Another is baby wipes. Procter & Gamble Co. began selling refill packs for its Pampers baby wipes plastic tubs when it launched the product in 1996 and now estimates 77% of mothers refill their baby-wipe tub at home.

But those are the exceptions, and neither require mixing.

Mr. Johnson says his determination to move ahead with Windex’s concentrated refills stems from the environmental benefits and cost savings that they offer. Windex refills use 90% less plastic than a standard 26-ounce Windex spray bottle, S.C. Johnson says.

Since consumers add their own water to the refill solution, the transportation savings add up, too. If 20% of the 21 million Windex Original bottles sold each year were refilled instead, S.C. Johnson estimates it would avoid transporting six million pounds of water.

The company is warning early adopters that the product faces challenges. “Most U.S. consumers prefer the convenience of pre-filled products,” a brochure accompanying orders will say. As a result, “stores won’t stock concentrates and companies hesitate to create them.”

Write to Ellen Byron at ellen.byron@wsj.com

We are often asked the following question: “what makes your cleaning service different?” The short answer is our level of commitment to healthy cleaning. We carefully consider a lot of factors before selecting our products and equipment (including but not limited to: effectiveness, sustainability, environmental impact, etc). Of all of the equipment we use, perhaps none is more important than the vacuum.

One huge benefit of our service is the reduction of in-home allergens; as an allergy sufferer this issue hits me close to home. All of the vacuums we use carry a certification by the American Lung Association (ALA) – proving ability in improve indoor air quality. We exclusively use Pro Team products carrying an ALA certification that are extremely effective and allow us access to those extra hard to reach areas!

We are unique in that we use two types of vacuums. The traditional (or upright) vacuum is something that most are accustomed to seeing. We take things a step further and also use a backpack vacuum (also known as a Ghostbuster vacuum for all of you Bill Murray fans). The backpack vacuum is much more effective on non-carpeted areas (such as wood and laminate) than the upright vacuum and also effectively reaches under furniture with ease.

One of our Pro Team backpack vacuums in action – if you look closely you can actually see the dust-bunnies quivering in fear! 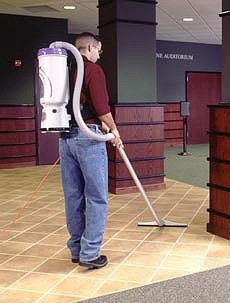